Available in the following formats:

With the aim of concentrating all the salient points of the Celtic culture into one picture for prosperity. The central sword depicts the cosmological Celtic belief system (the 3 worlds and 20 paths), the panels around the edge contain instruction for Celtic art construction, Ogham the druidic language for abstract concepts, healing herbs used by the druid from the British Isles, a current map of the remaining stone circles plus the border representing all the major Celtic art styles from ancient and post-Christian and much more.

With each Print is included a double sided A4 information sheet explaining in more detail each of the elements from the painting.

KEY TO SYMBOLISM of CELTIC WORLD 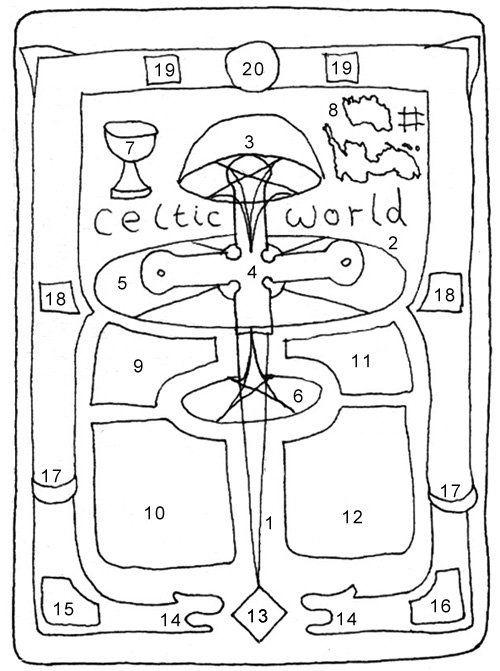 1. SWORD / AXIS OF THE WORLD – Symbolising the principle that is the invisible centre around which things revolve. The physical manifestation of this principle is expressed as the sun in the solar system, the North / South Pole for the earth, the spine in man and the neutron in an atom. If a physical body is devoid of this principle it is as if the life force itself were missing. E.g. the moon has no rotation of its own and is apparently barren. The development of this principle in man is cultivated and refined in disciplines such as Tai Chi.

2. CELTIC COSMOLOGICAL DIAGRAM – Showing the relationship of the 3 worlds and their connecting pathways. With the total number of worlds left as speculation the Celts focused on the relationships of the worlds to each other. The position of relativity always being the world in which the querent finds themselves to be in. The world above this being called the other world, while that which is below is called the underworld. E.g. In the hierarchical chain of the planetary world sun-planet-moon, taking planet as the point of reference then the sun would be the otherworld, moon the underworld and the planet as this world. In the human family grand parent-parent-child, grand parent would be otherworldly; the child would be the underworld and parent as this world if that were your reference point. Each world has 4 cardinal directions in them plus 4 pathways in order to traverse to the adjoining higher world and 4 pathways to traverse to the adjoining lower world. This gives 5 sets of 4 directions (1 set for this world, 1 set to traverse to the other world, 1 set for the other world, 1 set to traverse to the underworld and 1 set for the underworld) a total of 20 paths in all. Each path has a distinct character and is given a glyph (called a few), a sound, a name and a tree. Familiarising oneself with these concepts enables one to locate oneself in the scheme of things and then learn how to move within this structure.

3. GREEN MAN – Father time/ Chronos/ Santa Claus/ jack ‘o the green/ Merlin/ immortal father of us all. To be contacted in the wilderness of land, mind or heart. Especially font of old and untouched places.

4. ENDLESS KNOT – In this case deliberately broken so as to enable a bench mark to be established for concentration. The game being to follow the knot from one end to the other.

5. WHEEL OF THE YEAR – Showing the festivals in the yearly lives of the Celts. Starting in Samhain (Halloween) it is the pre-cursor to winter and the germ of the life that is spring. The most sacred part of the year where the dead are sent on their way to the next world and so end their journey through this. The wheel of the year continues to spin, through the solstices and equinoxes and in-between these by the grove festivals (Imbolc/ Beltane/ Lugnassad/ Samhain). Considered to be of prime significance are the 2 fire festivals (Samhain /Beltane) which are opposite one another in the year and celebrating fertility and death the master plan begins to unfold.

6. STONE HENGE – Depicting the main ring of 30 stones, this mysterious structure still stands out as an icon of British folk roots and seems to be the perfect example of the strength and majesty that the underworld should symbolise.

7. HOLY GRAIL – Real or symbolic and does it matter. The quintessence of mystery is its heart and everlasting life is its promise. To translate the message on the cup try J.R.R. Tolkiens’ The Hobbit for the basics.

8. ISLE OF ALBANY STONE CIRCLES – With a sketch man of a mere fraction of the remaining stone circles still left today, it’s possible to see the probable strong holds of these stone building peoples.

9. SACRED ART CONSTRUCTION – With his advice of finish each stage of construction before moving on, George Bain sets the scene for the aspiring Celtic Artist.

10. SACRED TREE LANGUAGE / CONCEPTS – Not only an alphabet but also used as a hand semaphore. The number of fingers representing the number of notches of the few and the shin or arm bone to represent the stave, the druids could communicate complex messages silently and if necessary in secret. Place your fingers on the right of the bone to indicate the BLFSN acime, on the left of the bone to represent HDTCQ, at an angle across the bone to signal MNngZR and straight across the bone to send AOUEI. It has to be confessed that the Druids (probably for very good reason) never wrote down this language and they passed it on in the physical presence of a Druid only (so don’t expect too much from here). 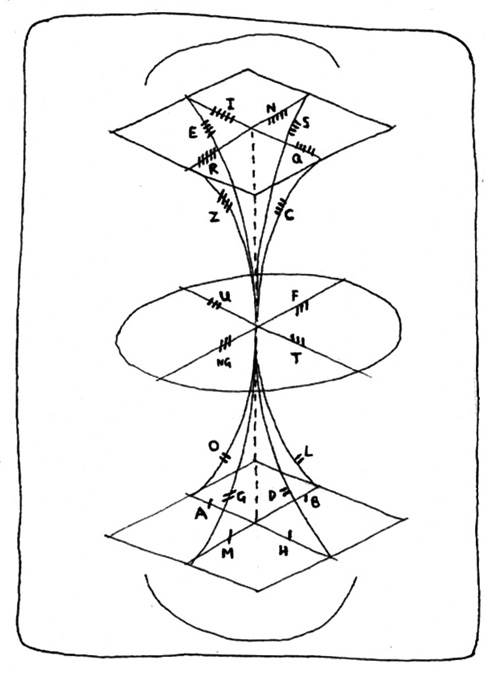 11. SACRED HERBS FOR HEALING – Being expert in the use of herbs (called simples) the druid would use his instinctive feel for nature and consultation with the planets to extract the best for her medicines. With today’s Herdie Gerdie world the subtlety of the medicine of yester-year may not be of so much use.

12. SACRED CENTRE OF GODDESS / APPLE – Known and loved by many, Glastonbury tor has been an icon to people around the globe, even in the time of Joseph of Arimathea and his nephew.
13. BALANCE ON HEART – And on what fragile thing does the axis of the world spin? The heart, not just feelings per say but feelings in balance.

14. THE 2 BEASTS OF DUALITY – Call them what you will but we’re all familiar with these! Sometimes seen as enemies of each other by others seen to mutually complement one another, whichever way you see them it will be subjective and no doubt an illusion.

15. REFINEMENT OF THE MALE ENERGY – Mostly known for fighting, but when they put their heads together… Progress through conflict.

16. REFINEMENT OF THE FEMALE ENERGY – Mother/ sister/ lover -the ever-changing form and acceptance of the underlying change-less-ness.

17. OVER COMING LOWER ANIMAL NATURE – Whether we know it or not most of our lives will be spent in our lower nature (no matter how learned or religious). With maddening glimpses and vague connections can we really hope to change by ourselves ? Perhaps some help is required.

18. GUARDIANS OF THE HIGHER COSMOS – Called Saturn/ Satan/ Karma its effect is this :- you cannot pass until its requirements are met, does it need wealth, power, will, flattery or perhaps a clear conscience, some things are priceless.

19. HIGHER MIND / UNIFICATION OF HIGHER & LOWER – Oneness as can not be believed but experienced. A strangely alien fascination to this perspective though not to be taken literally surly ?

20. AWEN / THE LIGHT – Symbol of the druids, the 3 rays of the spirit, invoked and made manifest.

Hahnemühle Photo Rag® Metallic is a silvery-shimmering FineArt inkjet paper with a specially formulated inkjet coating for FineArt use. The natural white cotton paper contains no optical brighteners and has the characteristic Photo Rag® surface structure and sumptuous feel. Photo Rag® Metallic features a special silvery-shimmering surface finish. The high-gloss premium inkjet coating with a unique metallic effect guarantees impressive printing results with bold colours, deep black and the perfect reproduction of colour and detail. The sophisticated silver metallic effect underscores the image and makes motifs with metallic elements, reflections, ice and glass, architecture and landscape shots, as well as black and white photographs with high-contrast tones shine. Photo Rag® Metallic is acid and lignin-free and meets the most exacting requirements in terms of age resistance.

Add your name and email below to be informed of when the next classes are available. Select the class you are interested in.

Add your name and email below to be informed about the next class.